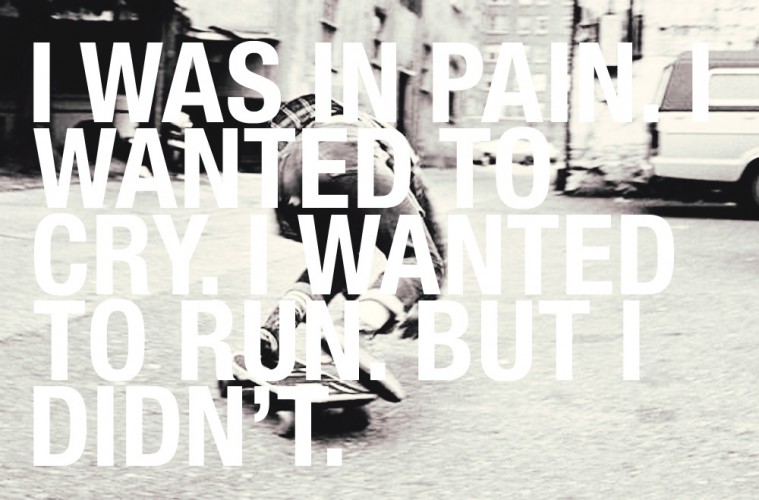 Kate was the first girl I fell in love with. I didn’t even know what love was back then. I was 7 and she was 8. I would share everything with her – half my sandwich, my orange Sunnyboy, I’d even give her the Band-Aid on my elbow when she got hurt. My parents fought a lot so they would send me to Kate’s whenever the fighting got out of hand. But even though it was two doors down, you can still hear the yelling. Whenever that happened, she’ll grab her brother’s beaten single kick and we’ll go roaming the streets together.

We didn’t know how to skateboard but we learnt together. Walking 20mins to Beckers Close (a dead-end road), we learnt how to push-off, coast, tic-tac, ollie, etc. We did eventually get good enough to skate at the skate park but we always had more fun at Beckers Close.

My parents could never afford to get me a skateboard. Kate and I would take turns skating her brother’s single kick. The other kids would make fun of me about it. Which lead me to my first fistfight at the age of 10. I dropped in and got pushed off my board by a boy 2 years older than me. I landed hard on my face. Kate ran up to him yelling and pushing. I tried pulling her back but she was too strong. She kept on pushing and hitting the boy until he threw a punch and connected it to Kate’s face. I don’t remember much after that. Only thing I remember was the boy who hit Kate had to be taken to hospital with blood all over his face. Apparently I broke his nose when I started swinging the skateboard at his head.

I wasn’t allowed out after that incident; even when my parents fought I wasn’t allowed to go to Kate’s. But somehow she’ll always know when they’re fighting and come keep me company. Maybe she could hear them yelling. I never asked her how she knew.

Mum eventually left Dad. I moved 2 hours drive away from Kate. We’ll talk on the phone occasionally. Usually when something big happened we call each other immediately. Back in late ’03 she called me at 2AM to tell me she lost her virginity. I hung up. She never called back.

I got an email from Kate last week and it read, “I’m back in the country!! I don’t care where you are or what you’re doing. Make it to Seven Mile beach by the weekend. Got BIG news!!!!”

I drove 11 hours up the coast from Sydney to Seven Mile beach. When I arrive I saw Kate ever so beautifully sitting in her car looking at her iPhone. I parked and walked towards her. She noticed me and came out running to hug me. She jumped at me and I caught her mid-air. It was a long hug. Then she said, “Come! I got something to show you” and ran off to open the trunk of her car. She took out a beaten single kick skateboard. Her brother’s single kick skateboard. “I found this while cleaning out my parent’s place. Jimmy wanted to throw it out but I couldn’t do it. Hey… thanks for the flowers and the money. We couldn’t have the funeral if it wasn’t for you.” I stared at her and replied, “I’m sorry I wasn’t there. Mum called me too late. I couldn’t make it in time from London.” She hugged me again. A tighter hug this time.

We walked around with the skateboard just like old times. We talked about the old days and the lives we have now. Kate eventually chose a spot on the beach and we sat down. She looked at me intensely and said, “I got big news. I’m getting married.” I froze. I didn’t know what to do. I stood there in silence staring at her. “I always imagined Pop to walk me down the aisle. But now he’s gone.” She paused. Everything around me had stopped. Time became non-existent. “Mum said Jimmy should do it, but I’ve never been close to him. I kept thinking who’ll be the best to replace Pop and I kept coming back to the same answer. You. I was hoping if you’ll be the person who’ll walk me down the aisle? It’ll mean everything to me.” I didn’t know what to say. I was in pain. I wanted to cry. I wanted to run. But I didn’t. Not this time. I forced a smile and said “Sure, anything for you Kate. Anything for you.” She threw her arms around me again. This time I felt tears drip onto my shoulder. I held her back but I didn’t want to let go.