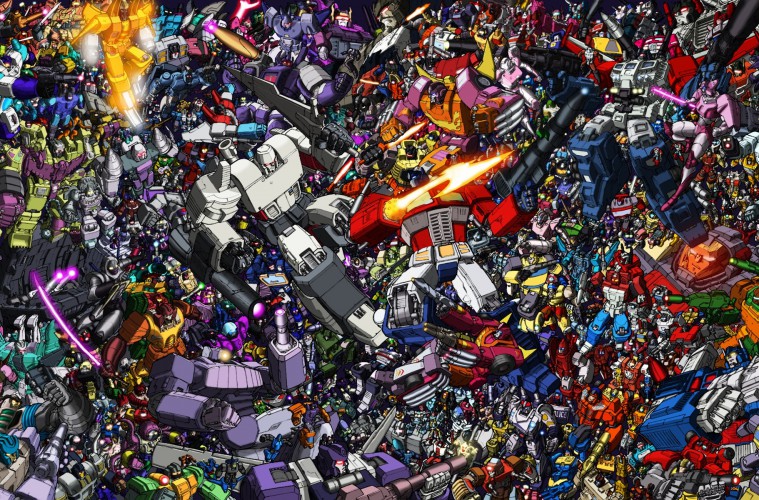 Feeling nostalgic on a Friday night in so I thought I’d put together a list of my fave cartoons from the 80’s. The 80’s were rad. Just about everything awesome happened in that decade. The cartoons of the 80’s dictated who your best mates were in school, the opening title songs got you excited as fuck every morning before school.

So here’s my #10 cartoons of the 80’s list. Feel free to add your own in the commets below!

#10: SilverHawks (1986) – Made by the same crew that brought you ThunderCats. “Partly metal, partly real”, the rest is vague (holy crap, did not remember the rainbow in the night bit!) but I remembered watching it lots when I was a kid. How awesome is that electro guitar solo huh? Rad.

#8. Voltron Defender of the Universe (1983) – Vehicle Voltron (Voltron of the Near Universe) – There were 2 different Voltrons; Vehicle Voltron and Lion Voltron. I always liked vehicle voltron more and I only ever liked watching the bit at the end of each episode where they join together and form Voltron, then slice the bad guy in half.

#7. Voltron Defender of the Universe (1983) – Lion Force Voltron (Voltron of the Far Universe).
As above. I have a memory of drawing the Voltron logotype on my wall. When Dad found out it wasn’t a poster, and that I’d drawn it on the wall with a golden ink marker he slapped me on the head.

#6. M.A.S.K. (1985) – The show was rad, but the toys were even cooler as they “transformed” at the press of a button. The posable figurines which came with each vehicle had great detail, and best of all, removable masks. Still regretting selling all of mine years ago at the junk markets to buy drugs, big time.

#5: Ulysses 31 (1981) – This show actually scared me as a kid. Some episodes gave me nightmares (I still remember floating human skins?!). It was more complex than the rest, so complex my brain struggled to keep up with it. In one episode Ulysses must answer the riddle of the Sphinx: “What animal walks on four feet in the morning, two at noon, and three in the evening?” – The answer was “man”. That fucking blew my brains out!

#4: Battle of the Planets (1986) – I was in love with Princess (knee high boots and constant upskirt shots, could you blame me?!). I wanted to BE Jason. Flares, guitars, ping pong, flaming phoenix… fuck, what a show.

#3: Star Blazers (1979) – Crazy emotional, technically brilliant. I’ve spent hundreds of dollars on buying Star Blazers memorabilia. From Wiki: Significantly, it was the first popular English-translated anime that had an over-arching plot and storyline that required the episodes to be shown in order. It dealt with somewhat more mature themes than other productions aimed at the same target audience at the time. As a result, it paved the way for future arc-based, plot-driven anime translations.

#2: Astro Boy (1980) – Should probably be at #1. I had dreams about being Astro, flying high, my batteries running out and falling. Whilst Astro was a goody two-shoes his brother Atlas was rock’n’roll. The best episodes form memory featured Bruton, a fighting robot designed to destroy the world’s most powerful robots. Crazy hardcore, heaps of death. I was emotional.

#1: Transformers (1984) – Hate to be predictable, but robots were my life. I drew them, collected them, they really captured my imagination as a kid. I could be anywhere, in a waiting room, out to dinner with the parents and relos, so long as I had a transformer with me I’d be a happy camper.

Damn limiting my selection to 10 was hard. Can’t go out without these honourable mentions:
– Robotech: Complex. Dogfighting sequences were fresh, romance was super heavy.
– Centurions: Teleporting equipment to you wherever you are? “Man and Machine. Power Extreme!”.
– He-Man and the Masters of the Universe: “By The Power Of Grayskull!”.
– She-Ra and Jem: Hey I had a little sister too, the Misfits, they were skanky hot, gah…
– Challenge of the Gobots (Mighty Machine Men): Always watched it, toys were small, and broke easily. Always thought they were a cheaper alternative to Transformers.