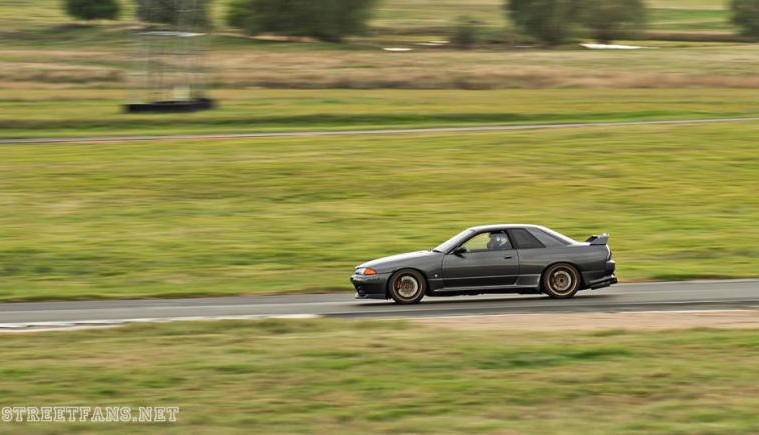 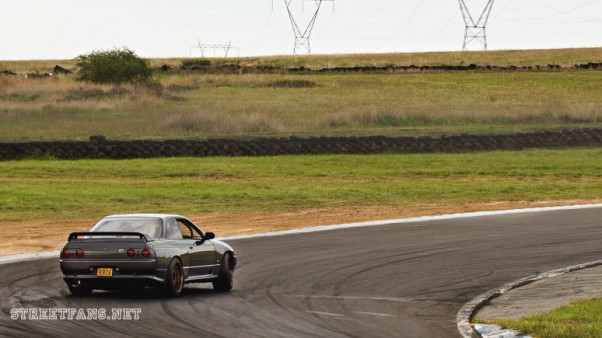 Private track days are the best! No sessions, no waiting around and if you’re lucky enough like I was yesterday, sometimes instead of sitting passenger, you get thrown the keys to some very special cars.

Justin’s RB26. – Wind the clock back 7 years ago and the first time I drove an R32 GTR that almost killed me was at a Import dealership I was working for, the car was fresh off the boat with lots of goodies like front and rear LSDs, multi-plate OS-Giken clutch, HKS coil-overs, and twin HKS something turbos; an ex-private sunday race car. It was set up aggressive and my manager at the time thought it was good idea to throw me the key “take it around the block and see if everything is ok”. So I did. It was noisy, stiff, fast, everything you expected from a race car and it was on the return trip that shit got real, through a set s-bends the tail came out and I thought I was dead, thank the Nissan gods for gifting the GTR with a smart all wheel drive system, the front wheels gripped up and pulled me out. Life lesson learnt = Dont mess with Godzilla.

Justin’s RB26 on the hand is a different beast all together. Harnessed up, engine on and my passenger ready I yelled out “ready to go? Lets do this!” my passenger might have thought I was talking to him, but honestly it was me checking myself.

Pulling out from the pits and letting the clutch out for the first time, it was.. easy, nothing like what I was expecting. RB26 was tame, composed, nothing like the GTR from 7 years ago.

Taking it out on the track for the first time I could feel the weight of RB26. She’s a heavy girl, but very planted and doesn’t struggle to get to redline. Turn-in is nice and sharp but the best thing about Justin’s RB26 is its AP Racing brake package. It just stops! Like JDMyard’s DC5 I was again braking way too early. A couple of hot laps in and the way Justin has it setup; silky smooth, it’s a easy car to drive. RB26 feels more like a RWD then a AWD, with the rear end getting loose several times, a slight counter steer, power on and let the ATTSEA do the rest = school girl laughs. I did 1:11 without much work and traffic, so an empty track and maybe more time a 1:10/1:09 is realistic, RB26 has so much more in it. Afterwards, I spoke to Justin and we reckons with a re-tune for a fatter HP & torque curve, new tyres, and a good driver a 1:08 is possible.

What an amazing car. Props to you man (Justin). 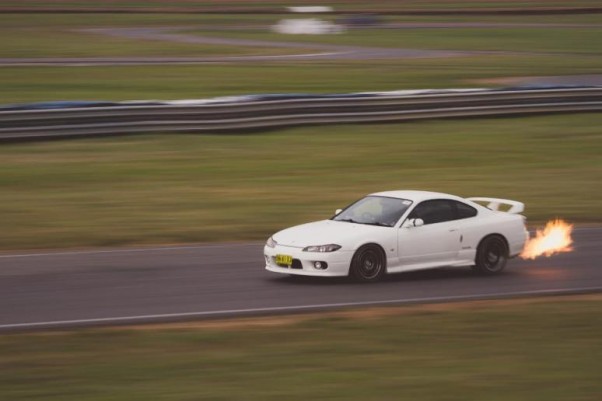 The second car I got to drive in anger was Nev’s S15. The car has come a long way, and it isn’t even close to finished yet. The boys and I have been building… well more like fixing and tidying it up since Nev has taken ownership of it. The S15 makes close to 200rwkw now, but on the day we ran it on low boost, due to oil temps sky rocking; I could only maybe get 2 hot laps before the Defi Gauge would starting beeping its head off.

I LOVE BOOST and RWD.

I love how the rear end feels alive and loves to dance with your right foot, its just so much fun and in the end I got a PB of 1:12. The limiting factor was its crappy D2 coilovers and standard brake setup (even tho it has new DBA4000s rotors and pads). The D2s even at the hardest setting, I felt they couldn’t keep up in terms of damping and rebound. At its hardest setting the s15 was stable through the fast sections and helped with braking, but around the tighter sections; when you needed the shocks to work, it couldn’t keep up, the tyres didn’t feel planted. I was left foot braking it around back section of Wakefield just to try keep it composed. The brake has had a major overhaul without going to next step of bigger rotors and callipers, the current setup is sweet for the streets, sunday drives and midnight thrash sessions. But on a track, where the car has no problems getting to 180kms + and you need to stop in hurry to hit the apex, it just doesn’t cut it.

Nevertheless the car is so much fun to drive; I’ve also been daily-ing it, since the DC2 is now gone and seriously if I had the money; I’d be rocking one.

A big thanks to Justin and Nev for allowing and trusting me with their cars. Its not an easy thing to let someone thrash the car you’ve poured your heart and hard earn $$$ into. It was an honour and I’m forever grateful.