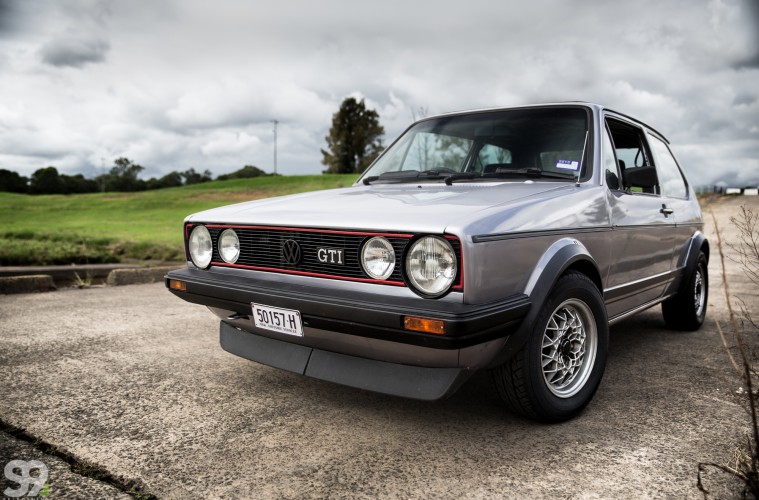 My obsession with the Mk1 Golf started when I was a kid. I was taught to drive manual at the age of 12 in my Pop’s Red Mk1 Golf, and something just stuck.  Later on down the track, the opportunity to buy Clunker came and I dove straight in. Clunker is a 3-door, 3-spd auto GLS, with a very interesting story, and a heap of character.

A friend of mine put me in touch with a guy named Todd in Queensland, who had Clunker for sale. Needless to say I was excited. I picked him up for peanuts and had him transported down from Brisbane. It was a 100% blind purchase. I had no idea what I was buying.

Clunker arrived and came as a 4-speed manual, a problem for me as I have to drive auto due to my disability. I rang around a few places, looking for an automatic box to put into him… I was dying to drive! This is where Matthew from Camden GTI came into the picture.

So, a friend and myself drove Clunker to Campbelltown and we met Matt, instantly I liked this bloke. Pommy geezer who straight away took the piss out of me for wanting to convert Clunker back to auto. “Back to auto”?! Hmm, so Matt had seen Clunker before? Yes! The Mk1 world is a small one and it turns out Matt owned Clunker, and was responsible for getting him up and running many years prior to Todd or me finding him.

Fast forward a year I often visit Camden GTI, whether it be to have Clunker checked over, or just to drop in and say hi. On this particular hot summers day I was having some starter motor issues and set off to Matt’s. Upon arrival, what do I see? A 3-door Mk1 GTI. Oh crap! I parked Clunker next to it, got out and looked at Matt, who had a cheeky smirk on his face, a smirk which I think I figured out later.

It was mint! We had a good chat about it, and Matt filled me in on the history of it. It was all original, had Wolfsburg parts, is a special edition, still on genuine BBS’! A sight I thought I’d never see here on our shores. I was instantly hooked, but taking him home just wasn’t an option. I already had one, and plus I had no room.

A month or so passed. I knew it was there, and knew Matt was schmicking him up for the possibility of sending him to a new home. To be honest a month went by and I didn’t think much of it. Being such a unique little car I thought I’d ask Matt if he would like for me to come in and do a photoshoot of it. You know, just to have a memoir of it, in case it sold. Who knows, the photos might help it sell too?

The night before the shoot I was chilling with Bertoni in my studio, and he asked if I had any pics of it. It just so happened that I did. I brought them up and we were in awe. Having Bertoni there gee’d the situation up even more! We began to talk about it and how beautiful it looks just being original as he is, not lowered, not on crazy offset wheels, just as is the day he was conceived. It got me thinking, what if someone bought him and chopped his springs, or worse got rid of those BBS Mahle’s that he’s wearing? The seed was planted…

I rock up to Camden GTI, and sure enough there he was, all clean and mickey, sitting waiting to have his pictures taken. “I just want a good home for him” Matt said. As if subtlely hinting at me. Matt loves this car, he just had no more room for him. His collection has slowly grown over the years and space has become an issue. The GTI wasn’t officially for sale, but Matt was on the lookout for a solid home.

Off we went to shoot. Matt was pilot and wasted no time in blowing my mind with what this little Hot Hatch can do. The mechanical fuel injection system lets this little rebel rev to 7,200 all day, everyday. Next moment we’re flying through the industrial area with 5 gears that never seem to end. The absolute highlight was the crackle when you back off the throttle, the rally like sound of back firing, I was hooked.

Up until now, I’d never actually been in a GTI Mk1. “Right, your turn!”. But how I thought? “You drive, I’ll shift gears”. Hell yeah! Wasn’t going to say no. It was perfect, had balls, gearing is just right, the response was breathtaking, tick tick tick. Next thing you know, we’re talking numbers. We get back to the workshop and he fills in the rest of the crew that Ved has bought this GTI. Someone comes out and says “He had you at hello”. I understood what that smirk was a month ago, maybe Matt was just waiting for me to take him home. After all he knows I appreciate and love them for what they are. The OG Hot Hatch. Plans for this car are to clean it up as much as possible, to resemble something you would see in a VW Museum in Wolfsburg. Simple as that.

It was hard for Matt to let him go, so much so that he didn’t watch us leave, but it’s not really leaving him. The only workshop allowed to work on my Mk1’s is Camden GTI. Matt knows he’ll see him again. If anything, we’re part of the same VW Club here in Sydney.

Sometimes you just have to bite the bullet and go with your heart. So, Bertoni, Justin and I set of the next day to pick him up and take him to his new home. What an experience seeing him in the mirror.

Welcome to the family Wolfgang.

PS: These pictures are a mix of the actual photoshoot and the day we picked him up, enjoy. 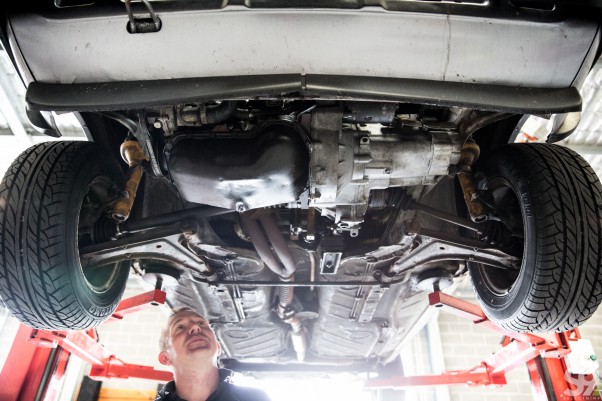 Of course Matthew wouldn’t let us leave before he had a final look to make sure it was all good. 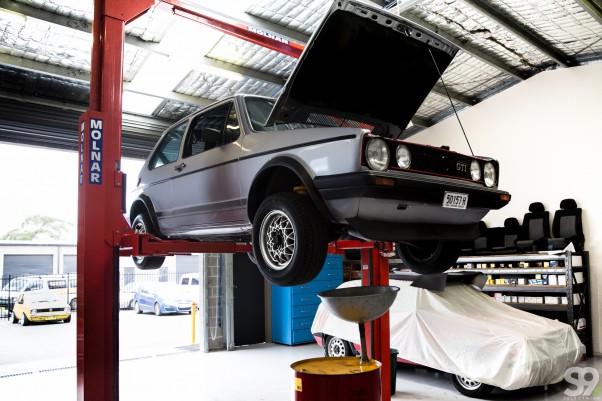 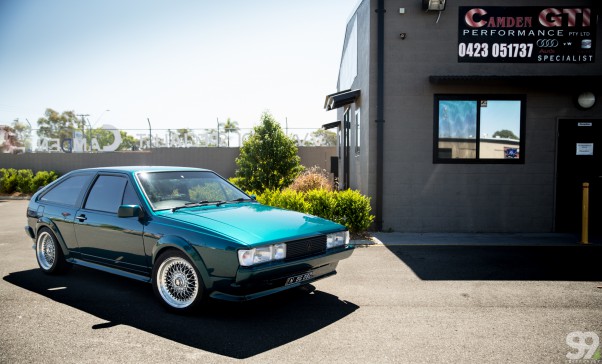 Matthew’s boosted Mk2 Scirocco and the reason for lack of space. 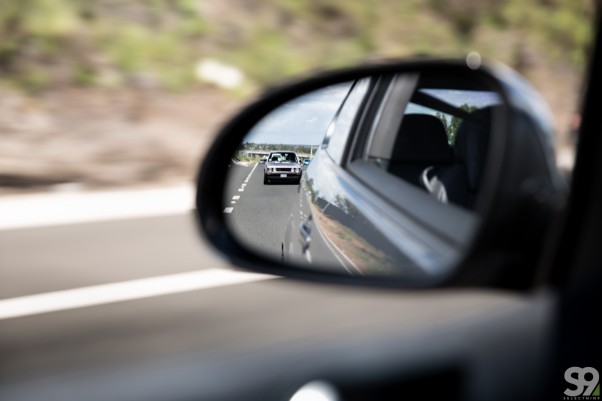 That moment you realise.. 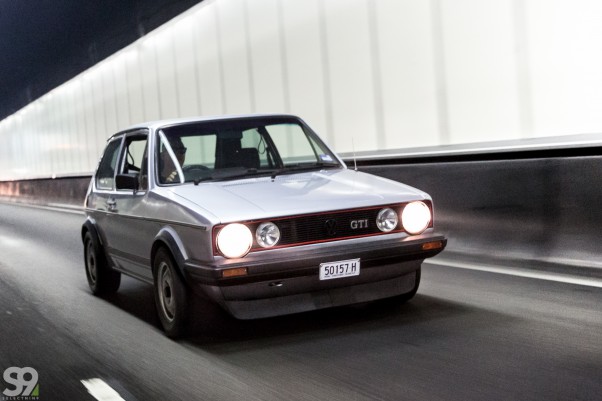 Bertoni stretching his legs through the airport tunnel. 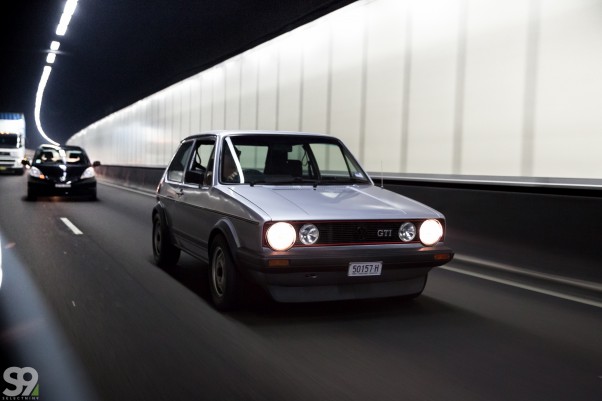 May or may not have annoyed some people, but whatever! 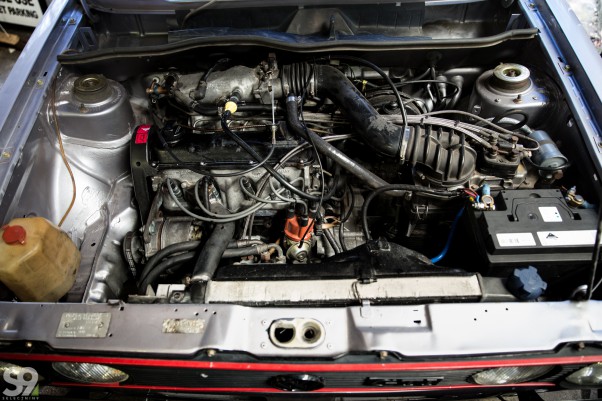 Where the magic happens. 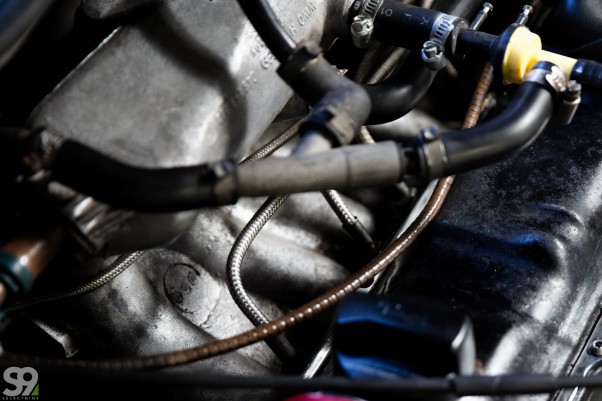 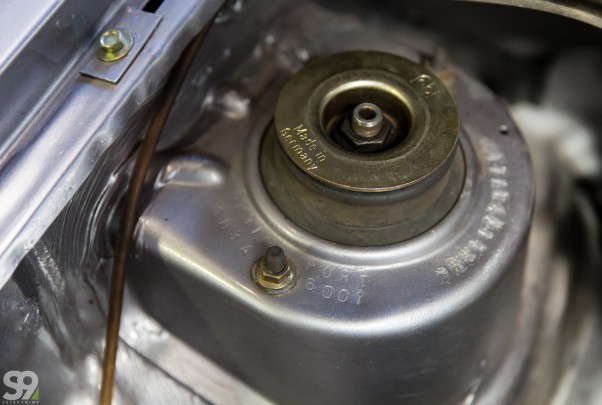 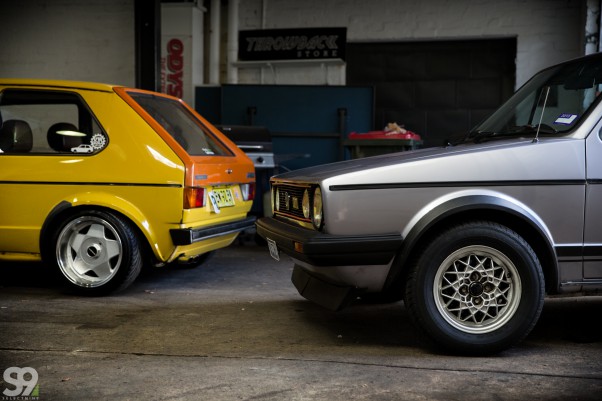 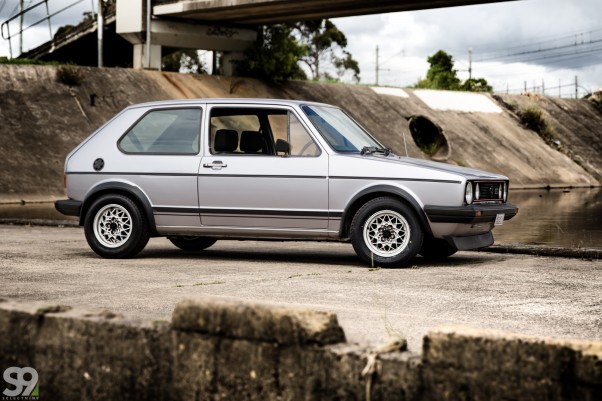 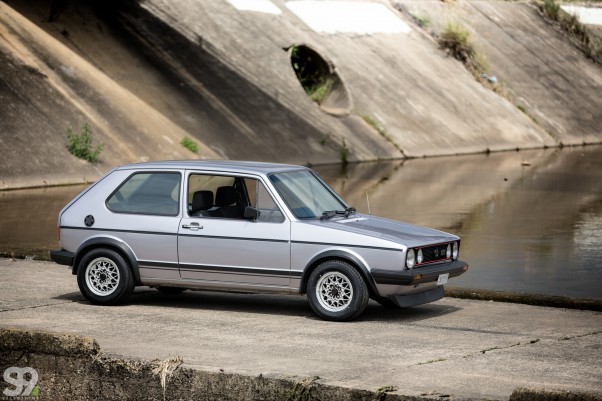 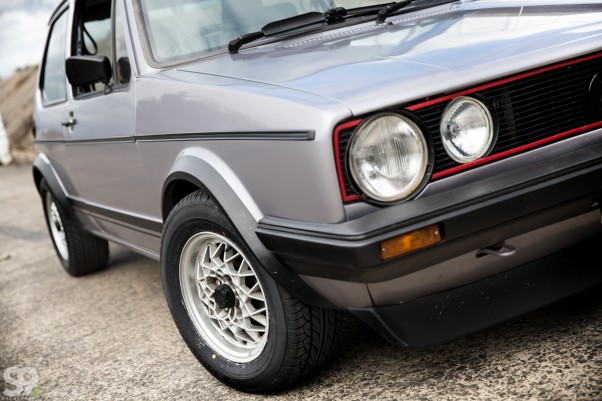 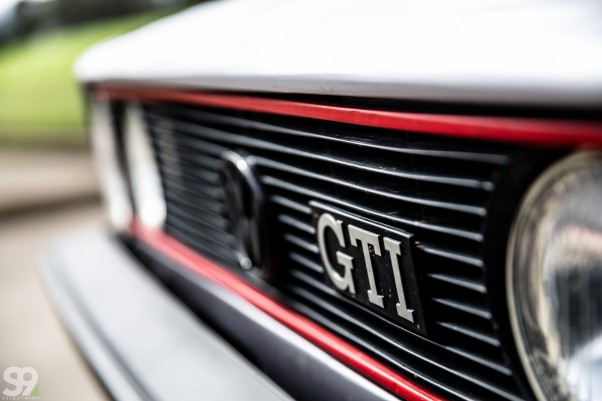 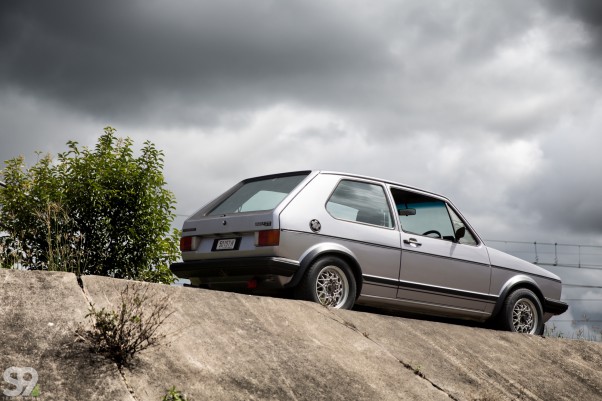 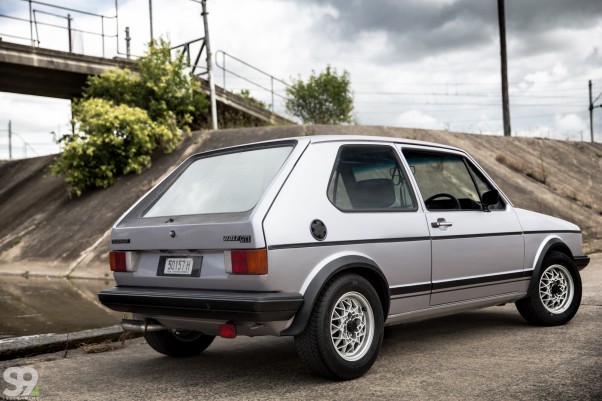 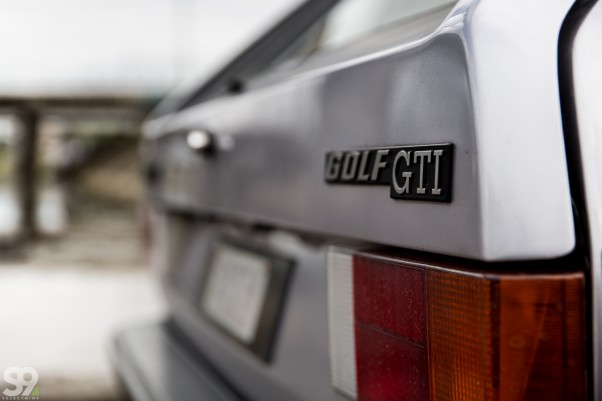 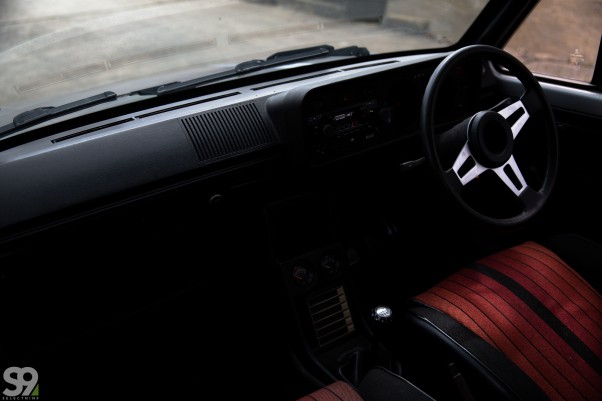 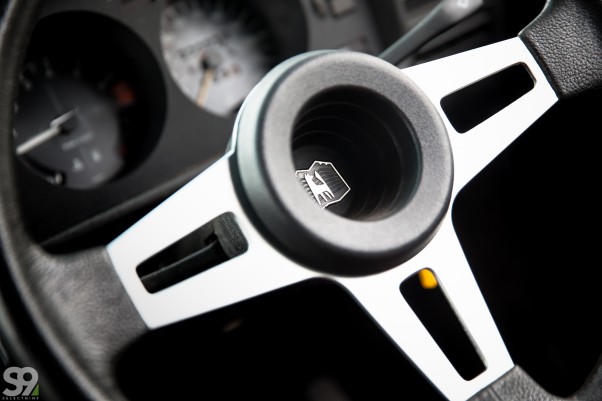 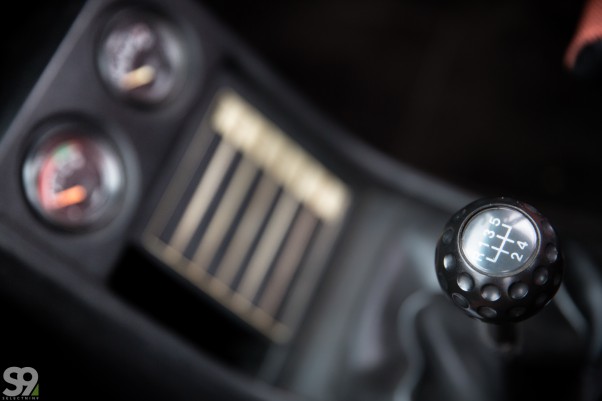 The original golf ball shifter, and that cassette stacker.