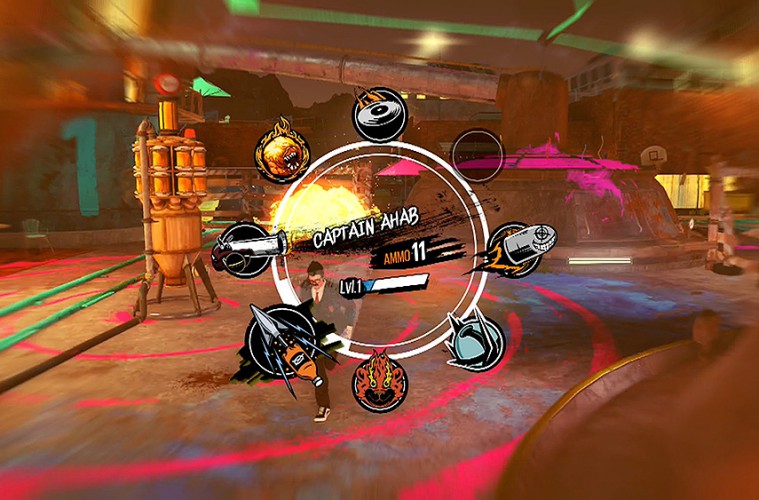 Sunset Overdrive is weird. Super weird, but in the best possible way. This game nearly slipped through the cracks for me. I wasn’t all that interested in playing it, although I am extremely glad I did. It’s witty, smart, engaging and most importantly, it’s different. The gameplay has a little bit of a learning curve but as soon as you get your head around how the game wants you to play, you’ll be grinding rails, bouncing off rooftops, swinging on power lines and blasting your way through hordes of whacked-out monsters.

To describe what this game is like is hard. If I had to try, I’d say it’s got the same punk-rock vibe as Tony Hawks’ American Wasteland, the grinding from Jet Set Radio Future, the dialogue from Saints Row, the “break the fourth wall” feeling from Deadpool and the open world full of zombies from something like State of Decay or (insert various open world zombie game title here).

Now you may be thinking all those elements combined are kind of like mashing up a cake, bacon, nachos, popcorn and a milkshake and expecting it to taste five times better than any one of them, because it has all five things in it. While I am almost certain that Baconnachopopcornmilkshake cake would taste like licking the floor of a carnival, for some reason the recipe works really well with this game. 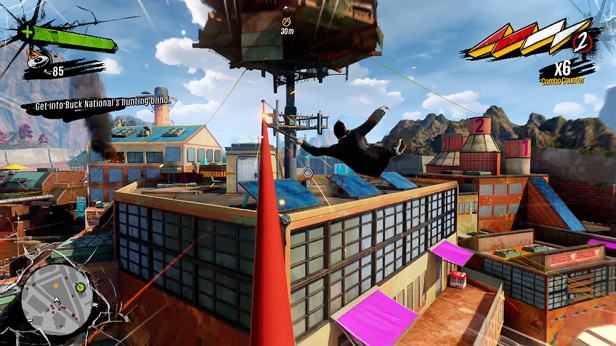 My favourite thing about Sunset Overdrive is the art style, it’s kind of retro with lots of neon colours with a similar look to Team Fortress. A close second however, is the weapons. From a TNT-Teddy Bear launcher to a fire bullet shooting gun that resembles male genitalia (aptly named “The Flaming Compensator”) there is a huge assortment of weird weapons to use and believe me when I say, you’ll have a hard time choosing just one.

There is a lot of customisation in Sunset Overdrive. Everything from underwear to weapons can be tailored with hundreds of options, colours and variations. If you can’t find a style to suit you here, then you are probably have the most unique dress sense in the world. 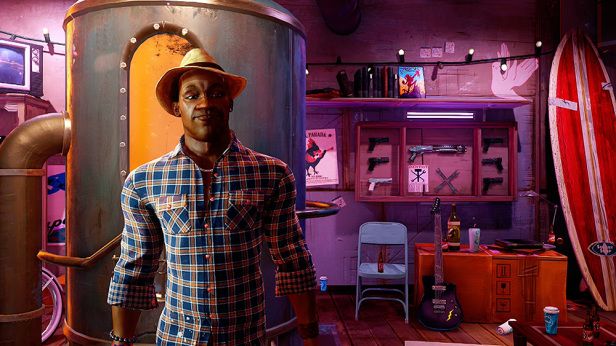 If you’re the kind of person who likes precision in a game, then this probably isn’t for you. There is no scopes, no head shots, no rewards for shooting a specific part of an enemy. There’s a pretty assisted aiming system to make sure that you hit your target while jumping around. The game forces to you stay mobile and constantly get more style points. If you prefer to play a game your way and go off the beaten path while making your own style, then Sunset Overdrive will almost definitely disappoint.

That said, I never felt like I was unable to do what I wanted, but for the first few hours I was running around on the ground playing it GTA style and wondering why I kept dying.

In summary:
If you’re looking for a funky fresh shooter with a tongue in cheek attitude that constantly acknowledges and makes fun of itself, then Sunset Overdrive will please you to no end. There is a huge world to explore, characters to love, customization to errm…customize and a rather large campaign with an engagingly fresh story. There is a multiplayer mode but I didn’t really enjoy it as it’s mostly just a “kill a large group of enemies for this amount of time and whoever gets the most kills wins”. All in all it’s a really enjoyable game that will keep you occupied for a decent amount of time. The re-playability isn’t bad after you finish the main story either, but I doubt you’ll be rushing back to play it again. I’d have to give it a 8/10.

Buy it if:
Normal zombie games bore you
You like bright colours
You like breaking the fourth wall
You like guns that looks like a gentleman’s sausage and plums
You like crazy guns
You like crazy people
You like Jet Set Radio Future
You are bad at aiming
You’ve always wanted to be able to make jokes about the side effects of Red Bull

Don’t buy it if:
You dislike bright colours
You like precision and tactics in a shooter
You have epilepsy
You like knowing what’s going on in a game
Nerds annoy you
You have shares in Red Bull
You are American and are sensitive towards stereotypes about being American
You don’t like guns

Check out this video to see some limited game play (no spoilers, don’t worry)