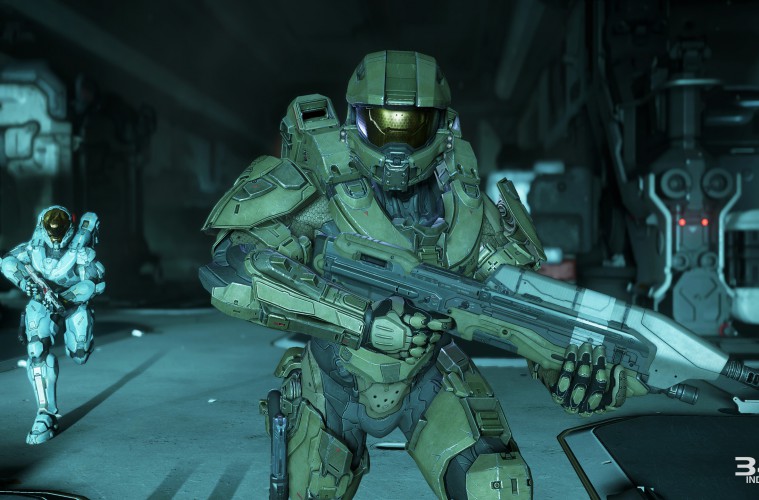 As a long time Halo fan I loved the game. Some will say it’s amazing, blurring the lines between game and interactive movie. Some will say that it’s Destiny crammed into Master Chief’s armor. Some will love it, some will hate it but that is inevitably the way that it goes when you try new things and Guardians is very new indeed. 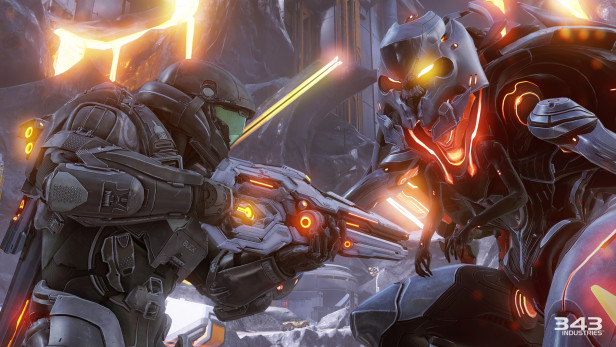 If you’re new to the series then this game, its setting and characters may not make all that much sense to you. I highly recommend you go back and play the other Halo games (The Master Chief Collection is a good way to start) and get yourself acquainted with these characters because holy crap is there a lot of tension in this game.

To summarize it real quick, Chief is a badass Spartan who saved the human race more times than I can count. His trusty AI sidekick, Cortana is basically the only thing he truly cares about besides doing what’s right. She’s also super opinionated and a little bit loopy in this one (her AI ‘brain’ was turning to AI goop in Halo 4) which leads her to some pretty poor ideas of how to fix all the universe’s problems in one swift move. Dr Halsey is the person responsible for creating the Spartans in the first place, with some rather questionable decisions being made on her part throughout the process. Cortana is based on her so of course there’s some weird tension between her and the Chief, although I’m still not sure if she is good or bad, but I think that’s may be what the writers want. Jameson Locke is a Spartan that was introduced earlier in Halo Nightfall. You will spend the most time playing as him while he hunts Chief with his team. Throughout this game I never felt connected to Locke all that much, but I’m team Chief all the way.

Then there’s some backup characters that round out the cast, some of which include:
– Arbiter, a banished Elite who is revolting against The Covenant
-Buck, another Spartan who is voiced by Nathan Fillion and is pretty much the best thing to happen to the Halo franchise since duel wielding Needlers
– The Warden, the most annoying villain in any Halo game ever
– Captain Lasky, the dude in charge who is driven by what’s right but never really resonated with me
– Roland, another AI who is actually pretty awesome and provides some good dialogue

So that’s just a summary of a handful of the characters, to keep you up to speed but again I highly recommend going back and playing the other games because these relationships and characters have been developed over many, many years and my summary almost definitely doesn’t do any justice for the emotional journey that these characters have been on in that time. 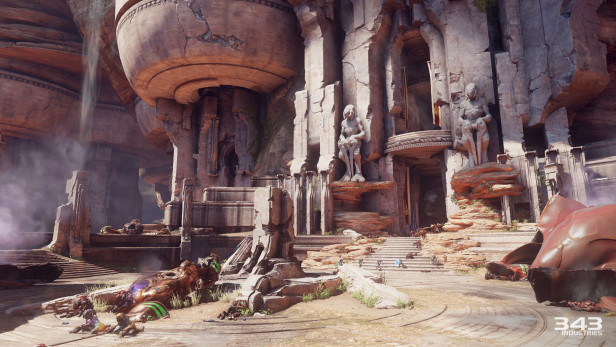 Halo’s story has always been a favourite of mine. I’ve been invested in the Master Chief and Cortana’s adventures since 2001. So naturally when Halo 5’s story started throwing curve balls I was a little uneasy but still intrigued. I must admit that the majority of the game had me on the edge of my seat thinking “what’s going on? who’s good? who’s bad? why is Nathan Fillion so damn handsome?” and other hard hitting questions.

Jokes aside, this is the most gripping and daring story Halo has ever told, but one that unfortunately doesn’t really culminate in anything close to what I felt it was building up to.

Now before you get your riot signs ready, let me say that it’s fair enough that 343 are making a trilogy, in turn meaning that this first installment had to be left open but did it need to be as open as it was? I mean, some closure would have been nice. Without giving away any spoilers, the bulk of the game feels like it’s building up to this huge showdown or reveal or some sort of climax, but it ends with almost more questions than it managed to answer.

Guardians pulled an epic ‘The Fellowship of the Ring’ on me and it hurt. Given the pace of the rest of the game, the ending was a sudden stop to what was otherwise the most tense and interesting story in the Halo series yet. I wish some more questions had been answered in the gorgeous cut scenes that often looked like something out of The Avengers, with stunning CGI and engaging dialogue delivered by great actors but alas, I’m left hungry for more Halo and have to wait to get my fix. 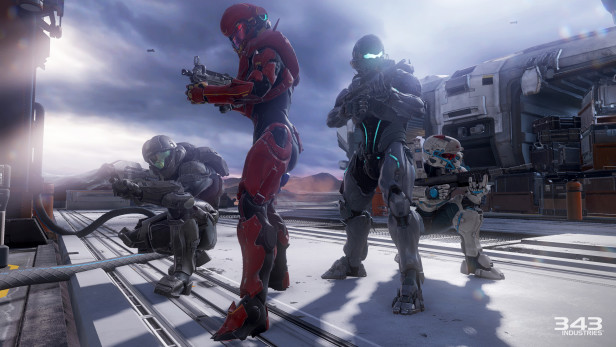 This is where things get interesting. In the older Halo games you couldn’t sprint, slide or even climb things which I always thought was a little strange given the fact that you play as a genetically modified super soldier. In Guardians however, you can sprint, slide, climb, hover in the air, dash, shoulder charge and even ground pound! Much more what I expect a super soldier to be capable of. I know a lot of people will compare the new gameplay mechanics to that of Destiny’s and they’d be right, it’s similar for sure. But Destiny is a great game…mechanically.

I love sliding around and shooting aliens, shoulder charging and ground pounding my way to victory. It’s slick and fluid and it’s what Halo needed to stay relevant in my opinion. People don’t want to trudge around and not be able to sprint any more. Kids are getting faster, games need to keep up! If I want to relive the glory days of Halo: Combat Evolved, I’ll get a bunch of my mates together and have a LAN party, but this is 2015 and it’s Guardians’ time to shine.

It took a little getting used to at first, particularly the aiming being tethered to the Left Trigger now. I must have zoomed instead of throwing a grenade at least 10 times before getting the hang of it, but once I did, I couldn’t remember how I used to manage without the zoom feature. Zooming feels quick and decisive, which I really like. Getting consecutive head shots with the magnum feels so much better when you’re switching in and out of zoom so easily. Zoom, bang! Headshot, slide into cover, jump, hover, zoom, bang! Head shot. It’s a great way to play Halo which is traditionally quite slow.

In addition to the new movement capabilities there’s also some passive features that have been added. Namely squad control, revival and environmental scanning. With your squad comes the ability to highlight a target to focus fire on, a weapon to pickup or a vehicle to use. I found this feature to be particularly awesome because I always felt that your team mates would just kind of frolic and fire. Now you can tell your team to grab a Warthog and focus their attacks on a Hunter while you clear the Grunts. It works and it’s great. Another new feature is squad revival. In earlier Halo games if you died that was it but now your squad mates can run up to you and revive you. It’s an excellent mechanic and one that came in handy while playing on Heroic/Legendary difficulty. Environmental scanning was first seen in Halo 3: ODST where you would basically hit a button and highlight points of interest and ammo. It’s back in Halo 5 and while it does work, I didn’t find myself using it all that much. 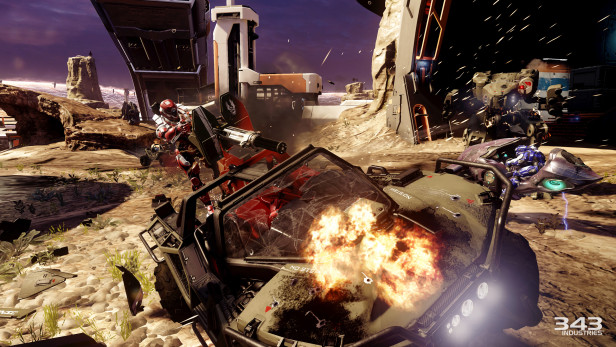 Halo and multiplayer is like Vegemite and cheese or Mac and cheese, or cheese and cheese – it just works perfectly well together. Halo has always had split screen versus and co-op modes. This is the first Halo game that doesn’t have split screen, a bold move and one that I was expecting a lot sooner. Times have changed, people don’t play in the same room as much as they used to. I’ve said it in many reviews that I’m no game developer and while it would have been nice to have split screen, I’m sure there’s a reason it wasn’t possible so I’m not complaining. Especially when online multiplayer works so well!

I’ll be honest, I have played all that much multiplayer as it’s only been on pre-release servers so I will update this when I’ve managed to have a proper go. But from what I’ve played, it’s just as good as ever, better even! The new movement mechanics have made their way over which makes the action all the more frantic. The maps are well designed and thought out, providing some really interesting choke points and sniper lines. I’ve played capture the flag and slayer so far and both felt great. I didn’t lag out or have any connection issues which is what I was most worried about considering the Master Chief Collection’s launch debacle. I’m looking forward to when Big Team Battle and all the other playlists launch in a little while but for now I’m satisfied that Guardians is up to speed.

There is also insane amounts of customization in the way of the new REQ system which is similar to Titanfall’s Burn cards or Forza 6’s Mods. REQ’s are basically cards that you can buy or earn through playing the game. You open packs and get a variety of REQ’s ranging in rarity. REQ’s can be anything from armor to weapon skins, assassination animations or emblems and even power ups as well as gun and vehicle drops in game. As I haven’t played much multiplayer yet I can’t say with absolute certainty how this will work but from what I’ve seen it’s pretty well balanced and added an interesting element to the game. I spent a good amount of time playing around with the REQ system, customizing my Spartan and checking out the cards, it’s definitely something that I will keep me interested. You can learn more about REQ’s here. 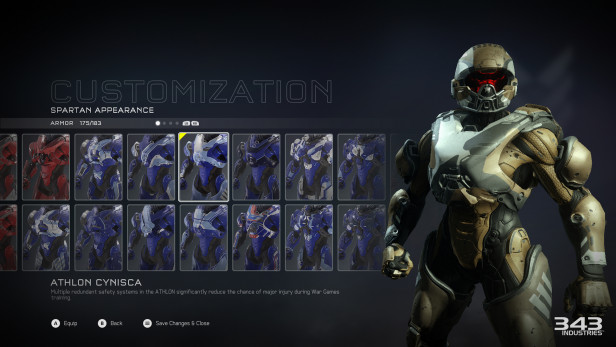 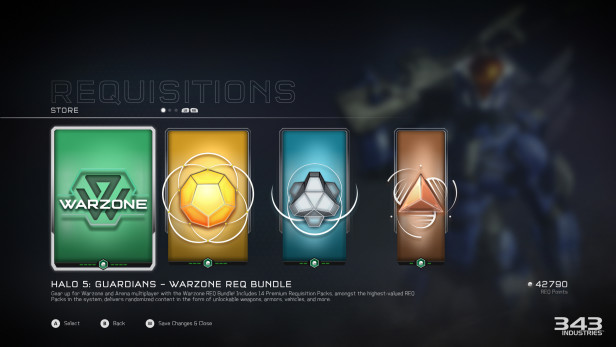 Halo 5: Guardians is an awesome addition to the Halo series which tries a lot of new things. For me, a lot of it worked. I’m a big fan of the new movement capabilities and I love the direction the story is going in. This particular chapter felt a little open ended to me but not enough for me not to recommend the game to new and old fans of Halo alike. Multiplayer was the biggest surprise for me because I wasn’t expecting to fall in love with Slaying Spartans as much as I did in Halo 3. Halo 5 is contemporary and an excellent step in the right direction for the series. Should you buy it?
100% yes. Guardians is a fun ride with a few hiccups but not enough to take away from the incredible experience that it is.

Video review coming after I’ve had a chance to play multiplayer some more. In the mean time you can check out my first impressions video below.

What do you think of the game? Got any questions? Ask me on twitter @pikalew or add me for a game – GamerTag: Super Pikalew