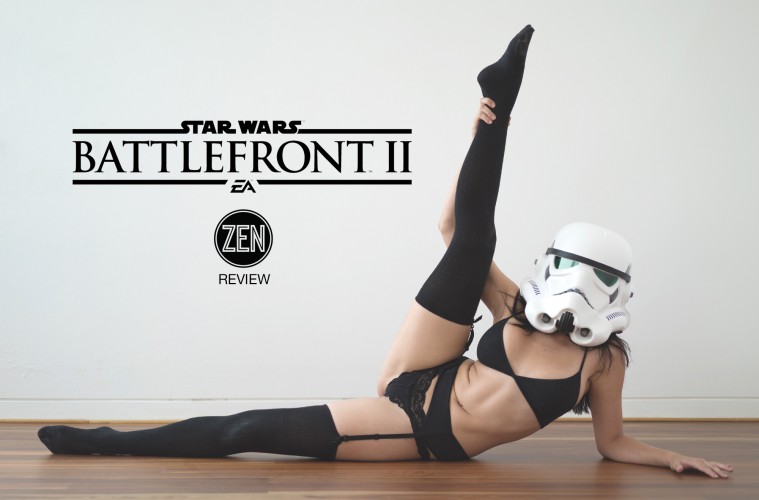 There’s been a LOT of negativity surrounding Star Wars Battlefront II over the past few weeks, so much so that EA’s been forced to make massive changes to the game hours before launch. It’s difficult to do a review on a game that has shipped unrefined as EA has left us with more questions than answers about future changes that intend to make the game right.

We’re playing Star Wars Battlefront II on the PS4. We’ve finished the main story campaign, something we’ve been excited about since E3 teasers (we really did think that Star Wars Battlefront I felt bare bones as it was missing a single player campaign). After some deliberation we thought we’d take a pause here, before diving into multi-player, and share our thoughts on the game for those sitting on the fence about buying it.

The game throws you right into the Star Wars universe, just like Battlefront 1 did with a great load-in game to play whilst your game is installing. Graphics are great… for the PS4. Every game on a PS4 has the anti-aliasing (or lack of!) jaggies in comparison to the ZEN PC Ultra set-up, not to mention shocking draw distances which cause textures to pop-in like mad (killing immersion). It’s getting SO hard for us to justify playing PS4 games knowing they would look superior on our PC. The characters are a little rubbery looking, stylistically a bit too cartoonish and goofy faced for our liking. We would have loved for ultra realism here, and to have true big feeling cinematic cut-scenes (think The Last Of Us), but as it is, the cut scenes aren’t as grande as we desired (though it does help when helmets go on).

Sound is amazing as expected from Star Wars. We hate background music in games, but Star Wars is an exception! Gameplay is AOK, but coming from playing a LOT of Ubisoft games we really wish there was a cover mechanic in this game (crouching just isn’t cutting it and makes the gameplay feel a little old and loose). Flying is damn awesome fun though, whilst flying totally frustrated us in the first game they’ve really nailed it in this one, so much so that we feel flying is now the most immersive and fun thing to do in the game.

So, so far so good. Yes we’ve had a few technical issues which isn’t great for a AAA game; frame drop issues, and we got stuck in the map once, and we wish there was more attention to detail, for example, we built up a sweat killing off waves of troopers only to be treated with a cut scene where our character didn’t have one bead of sweat on her forehead. Then there’s that cool looking grey bearded NPC that you kill early on, only to notice the same exact guy appearing again and again which really does kill the immersion (lots of games are guilty of this, why?! We loved when we saw an NPC wipe dog poo off their feet in Watch Dogs for the very first time, but we were really upset when we saw other NPC’s doing the same thing literally minutes after).

We’ve seen reviews suggesting Star Wars Battlefront II is the worst game of 2017 and whilst we’re not finished playing the game, we’d just like to be quick to discount these reviewers no matter how much weight they bare, as just 6 hours into Star Wars Battlefront 2 it’s dead obvious to us that this game is already better than many games we’ve played this year.