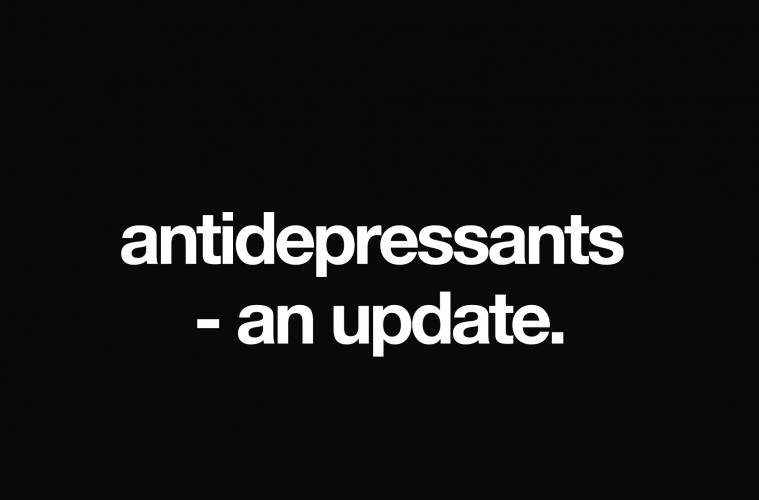 Just an update on my journey with antidepressants (if you missed the first feature, you can check it out here: Antidepressants).

A LOT has happened since my last update. Yesterday I caught up with my psychiatrist Dr Hyde (it was his first day back from holidays). Dianne came with me this time (it’s been Mum every other time) and as soon as we sat down in his little office we were on like Donkey Kong. Rapid fire, that’s what it felt like really. A whole lot of heavy information regurgitating and bouncing off the walls.

We talked about swapping out Efexor for another antidepressant that doesn’t have much of an impact on my libido, but truth is I had already run my own experiments with Efexor and had come to the conclusion that I didn’t need it. I was initially on 75mg of Efexor/day. When I first saw Dr Hyde early November we doubled the dosage and I started taking it in the morning rather than night. I started to have low libido issues about this time. I literally couldn’t even come to porn. I then upped my dosage to 300mg/day and I was waking up without a hard on at all, and that alone was making me more depressed than anything! One day I decided to see what 600mg of Efexor would feel like; the next morning I literally woke up with pins and needles in my dick which hung around for most of the day (I even had troubles peeing that day).

At the same time as all of the above I smashed my bong (with my Dads hammer making it a little more significant perhaps?) and decided to go cold turkey on weed. I coughed up a shitload of dark hard phlegm over the first few days and amazingly the freaky noises I was hearing and feeling in my chest whenever I took a deep breath were completely gone (making me realise that bongs might not be THAT bad as it only took a week for the shit to come out?!). I was also sweating profusely all day and worse at night where I’d wake up freezing every few hours in a pool of sweat (and have to change clothes or move to the couch as my mattress was soaked).

Going cold turkey on weed was hard. I lost it more than a few times. I caved in on day 7 and smoked a spliff. I was of-course instantly happy, smiling and even laughing again. What was different though was that one spliff made primarily of tobacco with a sprinkling of leaf was enough to get me SO high. For a few days I smoked 3 jays a day, one day I cut it down to just one jay that day but the sweats came back hard and so too the yucky bits of me I didn’t like.

I watched an opinion piece on YouTube comparing bongs to joints. The guy reminded me that bongs are dirty things! I remembered that the bongs I smoked in high school were made out of Mr Juicy bottles and bits of hose we cut from someone’s lawn. Over time I somehow convinced myself of glass bongs being a legitimate respectable thing, but I can’t really see them being anything but filthy right now.

This train of thought really needs expanding as it’s all still very new to me; but I’ve somehow gotten off bongs and it truly does feel like “just like that”. For the past few days I’ve smoked no more than 3 weak jays a day. Something has definitely changed.

So back to Dr Hyde. All the above came out during yesterdays session. He doesn’t believe I am suffering from depression anymore, instead we’re going to focus on my anxiety or bipolar-like symptoms. IE: my mood swings. We’re increasing my dosage of Quetiapine before bed to get a better night’s sleep and he also suggested that since Quetiapine is not addictive, I can quite comfortably take more as needed during the day. IE: If I feel like smoking weed I could replace the weed with a dose of Quetiapine. Scary thought huh? But hey, happy to give it a go.

It’s now the morning of the first night on a larger dose of Quetiapine and for the first time in a very long time I’ve had a solid 9hrs of sleep (I’ve been averaging 4hrs of broken sleep usually and have had rare occasions of 5hrs sleep maybe even a 6hr sleep semi-recently). I woke up high as a kite. I felt absolutely ripped but my head is sharp. It’s loud up there too, very. I’ve been spamming social media all morning. I’ve been writing this… that brings us up to date. My next meeting with Dr Hyde is in 4 weeks from now. Dianne, who has literally been taking care of me daily for the past 2 weeks leaves tomorrow. It’s going to be interesting to see how I go alone over the next few weeks.

Reminder to self – I’m still in a hole within a hole. The weed addiction and depression is one thing, but there are bigger things that I know I need to deal with too. That I’m not in denial about.