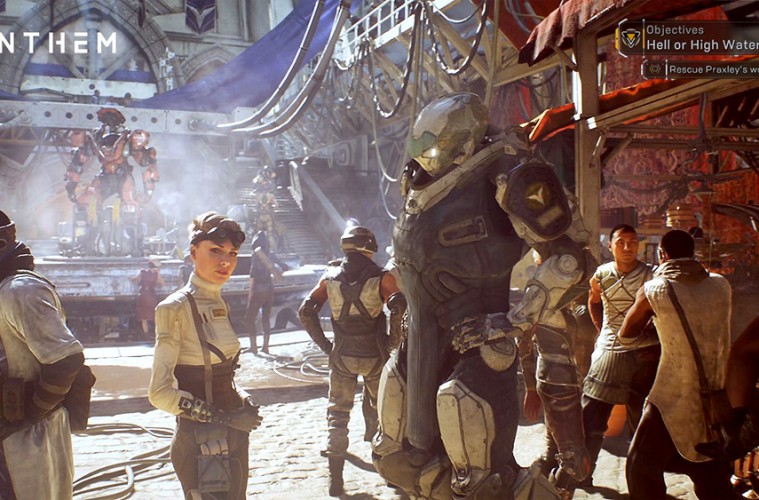 One of, if not the biggest reveals at E3 2017 was Anthem. Watch the gameplay reveal in the video above, ignore the fact that the game is being made by EA Games/Bioware, ignore the cheesy dialogue, look at that lush world. Quite impressive, right? When I saw this reveal in 2017 I called absolute bullshit. The scene in the hub where your character speaks to that random guy, come oooooonnnnn, that can’t be live?! It looked so pre-rendered to me, there was just no way the game was going to look that pretty live and too right, the game is out now and the downgrades are savage.

All the YouTube reviews that matter are strongly suggesting that right now, gamers DO NOT BUY THIS GAME as it’s an unfinished and unbalanced buggy mess. Whilst it might be safe to buy the game in a few months when they’ve sorted out a few teething issues, some things might not be able to be fixed at all such as the abundance of long loading screens (oh this is a deal breaker for me!), dead hub, a map that looks the same wherever you go, repetitive game structure, weak story and cheesy dialogue.

In reaction to E3 and downgrade culture I did a podcast in January 2018 outlining the importance of TRANSPARENCY, especially in relation to business. Sadly, the lack of transparency in the gaming industry is still just as rampant today as it was when I made this podcast despite the big guns on YouTube calling out the devs and firing shots this entire time.

Am I surprised about the downgrade? Not at all. Am I upset about it? Nope. Would things be different if I bought in on the hype and pre-ordered the game? Most likely. I’d say all those who pre-bought and are currently playing the game are already defending because they’ve already committed so much time into living with the bugs, the server disconnect and reconnect issues and sitting through loading screen after loading screen.

You’ve got to be in it to win it, but in this case I’m glad I went with my gut and made the choice to sit on the sidelines.