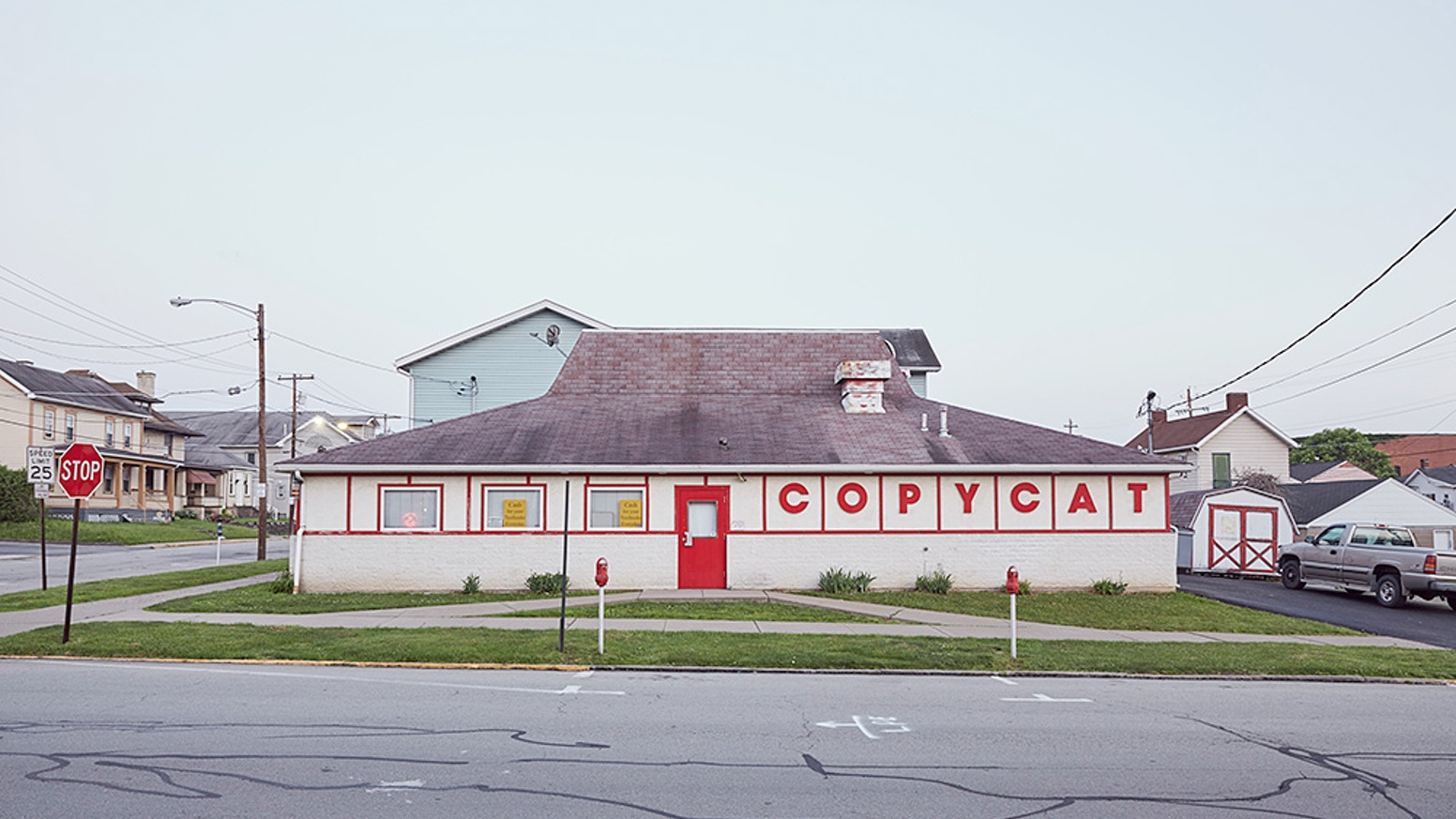 It was raining hard last night and we were starving. It was 7pm so we decided to order something to eat. We loaded up Uber Eats and it was a blackout. There wasn’t one single restaurant open for delivery. WOW… so Uber doesn’t deliver food when it’s pissing down rain? Good to know! We then loaded up Deliveroo. There were only around 12 restaurants to choose from and all of them suggested long waits of 45min+.

It’s times like this, when you’re starving and there’s no good food delivery available, that you think of ordering a pizza.

Anyone who’s been to Italy and had a real pizza KNOWS that Domino’s and Pizza Hut pizzas DO NOT look anything like the OG; thin crust, minimum topping of only a little bit of cheese and a veggie or two, sometimes a meat. It was the Americans who made the pizza what it is today; bigger, thicker and overloaded with cheese and toppings.

Pizza Hut opened up in Australia in 1970, Domino’s a fair bit later in 1983. I was born in 1975, Sydney Australia and never heard of Domino’s until my teenage years. McDonalds in Kingsford today was once where Pizza Hut was, in fact both McDonalds and Pizza Hut shared the same location for many years. For my family it was mostly McDonalds by day and Pizza Hut at night. McDonalds already felt like fast food chain with it’s slippery plastic booths and hard tiled floor. Pizza Hut felt much more like a restaurant with mood lighting, carpet and table cloths.

We debated for a minute. We knew Domino’s would be fast. 20 minutes flat and it would be at our door, piping hot. We then reminisced about how Pizza Hut was more about restaurants than fast delivery. We remembered having good times in Pizza Hut restaurants as children, the salad bar, the gingerbread men, and we also remembered the extremely deep-dish pan they brought out to the table when ordering a deep pan pizza.

We decided to go old school and order Pizza Hut. In a new browser window we google searched “Pizza Hut” and this is what came up: 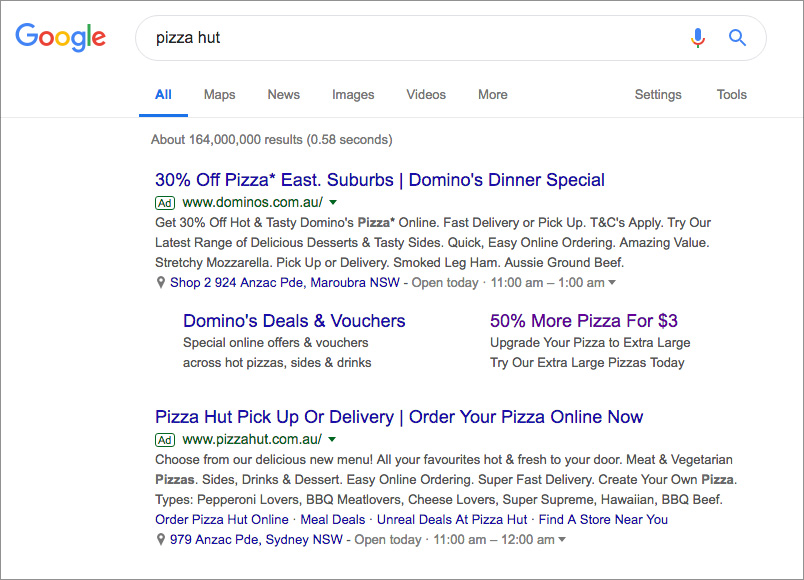 Surely this shouldn’t be allowed? We searched for ‘Pizza Hut’ and the first result, a paid advertisement, is Domino’s and the 2nd advert underneath it is Pizza Hut. How on earth is this acceptable? There’s just something SO wrong about this that it hurts to think about it.

We accidentally clicked on a Domino’s link 3 times when we were trying to find discount coupons for Pizza Hut (we only found Domino’s coupons but failed to easily find any Pizza Hut coupons), in the end we decided to leave the coupons out of it and just go check out the Pizza Hut website.

What a mess. The Pizza Hut website has been optimised for your phone, problem is we were viewing it on a browser, on a large monitor with browser set to full screen. Content loaded in a thin strip in the centre (obviously designed for phones), but adding things to the cart and confirming steps forced us to hunt for the “next” buttons, which loaded all the way in the extremities of the screen.

We then realised there was no pizza tracking, and that it would take 45 minutes or more. Is Pizza Hut trying to NOT be competitive?!

Domino’s dominance now made total sense. Choosing between Pizza Hut and Domino’s seems to be more about the ease of ordering and speed of delivery vs actual quality of the pizza itself.

On checkout we noticed an option to pay by cash! Hey! The galloping ‘481 11 11’ jingle came to mind! We figure that opting to pay cash might suggest we were going to tip, and maybe that would get the pizza to us faster?

The 481 11 11 jingle in the video above killed it pre-internet, when phones were how you ordered pizzas.

Pizza Hut delivered in around 45 minutes. We still gave the driver a $5 tip (that Chinese red packet money came in handy!) and for that the driver was extremely grateful.

The pizzas were as expected. One bite of the Supreme and that capsicum just took us back. The deep pan wasn’t anywhere near as deep as it was back in the 90’s, but it still had that oily olive oil base that had been fried on the pan for that crunchy crust. If a pizza is all about the crust, then we think Pizza Hut wins, hands down.

In the end we tried to weigh up the difference between going for something more from the heart (in this case Pizza Hut), or going for convenience (Domino’s). But in reality it cost us more to go old school, and it took way longer to arrive.

It’s obvious that Domino’s success is based on tech and delivery. Where Pizza Hut invested in eat-in restaurants, Domino’s invested into a killer, easy to use online ordering and tracking system which gathered a lot more franchisees, which in turn allowed them to radically expand their network, thus allowing them to offer ultra-quick delivery of 20-minutes.

So in conclusion, There’s no doubt that Domino’s Pizza would have been cheaper, gotten to us faster and it would have been hotter too. There’s something to be said about how both Pizza Hut and Domino’s pizza base and crust, when not so hot, tastes like cardboard. We’d argue that Pizza Hut wins on the crust, but it’s not by a large margin.

After filling our bellies we came to a somewhat sad conclusion that the ‘feels’ didn’t quite outweigh the logic. We went old school for the romance, but the ordering system was a little clunky, not knowing exactly how long the delivery was going to take made us a little nervous, and in the end, the long wait and not so hot pizzas kinda tarnished the whole experience of wanting to support the alternative.

In conclusion, we’re on the fence and we’ll most likely be on the fence for quite some time when it comes to choosing between these 2 giants of fast food pizza delivery.