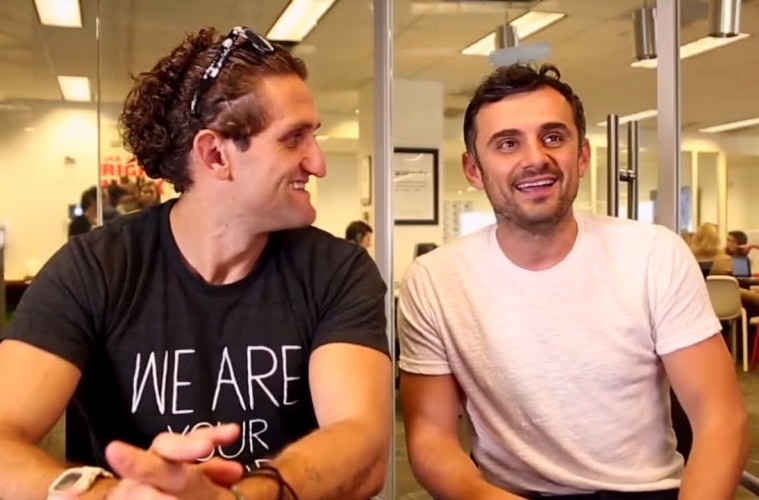 My thoughts on Gary Vee

Gary Vaynerchuk (it’s no wonder they call him Gary Vee) is an entrepreneurial/motivational speaker type which many have suggested I check out. I tend to smell what I like and don’t like quicker than most, my physical gut is weak from IBS but my “gut gut” (which I use to trust my feelings and instincts over logic) is the real dealio and the gut that gets put to the test more often than the other these days.

My “gut gut” says that Gary V is in the same basket as that orange book “The Subtle Art of Not Giving a F*ck”, a book which is in high rotation atm, written by some famous blogger who’s not famous enough to be mentioned by name over his book title. “Don’t knock it until you read it Justin” — Fuck I hate it when people say that. I swear I’d be broke from buying all the crap people suggest I buy, but hey, I tried to buy the book. I read the marketing jargon on the front and back, saw how huge the type size was inside and just couldn’t bring myself to be another statistic. I ended up having a mate send me the audio book for it and hey… I get it, the guy speaks like I do (I assume because he’s my age or thereabouts) though he’s saying shit I already know… and I just couldn’t make it past the first chapter.

“How to Vlog like Casey Neistat by Casey Neistat” — 3.6 Million views yup… that’s legit the title of the video.

Then there’s vlogger Casey Neistat, known for overproduced film techniques like mounting your camera on something (like a railing, a bench in the park etc.) and record yourself waking by or entering a building. I hate that fake shit and hate it that most if not all vloggers do what Casey says. They say jump and you say how high.

OK so back to Gary Vee. Turns out he was born in 1975, same year as me! I like him already (bias is a great thing!). That makes Gary 44yrs old this year and man props to him for hustling as hard as he currently is. It can’t be easy to keep that energy level up 24/7 at this age.

His professional background is similar to mine. I was a graphic designer for the most part, but I too ended up in digital marketing and social media as Gary has. Where he’s radically different to me is that his net worth is $160 million and he’s married and has kids.

I watched one of his more recent talks. His intro to the stage was, as expected, damn cringy; Loud music, smoke machines and an overly excited host who’s dress was louder than her microphone, which was 10 times louder than Gary’s microphone!

The entire talk was aimed at getting the audience to value, then harness the power of social media advertising on Instagram and Facebook. At the end of his talk he did a Q&A session where one young guy asks a stupid question which Gary absolutely shot down. I always was that guy that put his hand up in school to ask a stupid question, and I too was shot down and made fun of for asking, so as fucking stupid as the guy that asked the question was I’m not sure he deserved to be singled out so savagely.

What’s interesting is the video linked above starts with the dumb question, which was along the lines of asking if there was anything else out there in marketing apart from Facebook and Instagram, to which Gary tore the guy another hole (as his entire talk was to inspire people to advertise through Instagram and Facebook). Hey I love tearing people another hole too, but I’m not sure I would have cut the burn out from the Q&A, then paste it at the very front of the video for bonus points.

But just listening to how Gary tears this guy another hole makes me relate. He’s blunt, I like that. I’m like that. He doesn’t really care for you, but he’s willing to give you all the secrets, the tools and it’s your choice whether you want to use them, or not, and that frustration of ‘kids’ not taking action on the energy and insight given is something I share big time. Gary suggests that the only way he feels AOK with sharing his secrets (being that you must advertise on Facebook and Instagram in order to be successful today) is because 90% of the audience won’t do what he says anyways. That’s a HUGE factor you that you just can’t ignore. It’s real, and I feel it’s the honest truth about our youth. It’s so beautiful I wish I said it.

Another thing Gary nails on the head is that everyone in the audience that was in their 40’s has an advantage in that we knew what life was before the internet. We lived full lives. This thought kinda blows my mind. I already knew I had an advantage for being there from the start of the internet. I know I was one of the first web designers in the country and I most likely made more money than most creatives in their 20s during the dot com boom.

The last thing I took away from watching this one talk of Gary’s is that he strongly believes in doing everything for his audience. He doesn’t believe in creating content that he personally wants to see, he believes you have to put your audience first and post what you think they want to see.

Gotta say… I TOTALLY disagree with this crap!

Sure, whilst Gary Vee has 20yr olds sucking his dick in all his Q&A’s, with nearly every person that gets on the mic saying they love him (to which he responds “I love you too!”), OR they demand a hug or selfie with the man on stage, to which he also happily complies, I highly doubt that Gary truly appreciates his fans as much as they do him.

I believe that I’ve experienced enough of life and worked hard enough to say that I’m an individual, and that I’m worthy of curating and promoting what I believe to be good or not (as opposed to posting what I know the kids like already). Where Gary Vee is comfortable in serving his audience what he thinks they like, I find that way too easy and choose to take the path less traveled by.

With regards to ZEN, my last business partner has acknowledged that there’s a lot of my DNA in the company and that’s why moves have been made for me to buy his share out and take complete ownership of the brand.

Ultimately I’m trying to run a company as me, myself and I. Running a company as an individual doesn’t really come with any rule books, whether it pays out or not is yet to be seen but my “gut gut” says that so long as I stay true to myself I should be good.