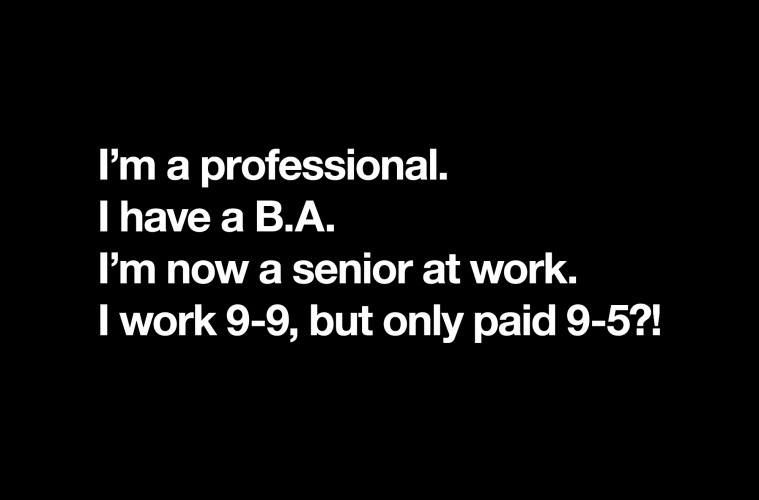 Why don’t professionals get overtime?

I presented the site and INfront Manifesto on the big screen and we got great feedback from the Knights. They acknowledged the importance of supporting grass roots efforts like INfront. They then asked if we would like to join them for their regional meeting…

… Oh my God. Dom and I had just been invited to the JEDI COUNCIL!

We sat in on their Jedi High Council, giddy as fuck. The Knights were arguing about the price of Adobe Photoshop. To me, it was fascinating, to Dom it was wrong. Dom manned up and had something to say (HAVE SOMETHING TO SAY!). He slid the mic closer to his mouth and this came out:

“I work hard. I spent 4 years studying to be a Professional Designer. I’ve been working as a Professional Designer for the past 3 years. I get paid from 9AM-5PM but I’m expected to stay back and work until 9PM most nights without extra pay. My cousin works at McDonalds and gets paid until 5PM, at 5PM he’s outta there!”

Jaws dropped. Silence for at least 5 seconds but felt like 5 minutes. There was no answer. We were applauded once again for being able to inspire the elders and just like that, on the biggest high known to man, we were flown back to Sydney on AGDA’s account and the rest was history.

Read this feature on Medium (much nicer on the eyes!): https://medium.com/@justinfox_30083/why-dont-professionals-get-overtime-e10759d1fa92