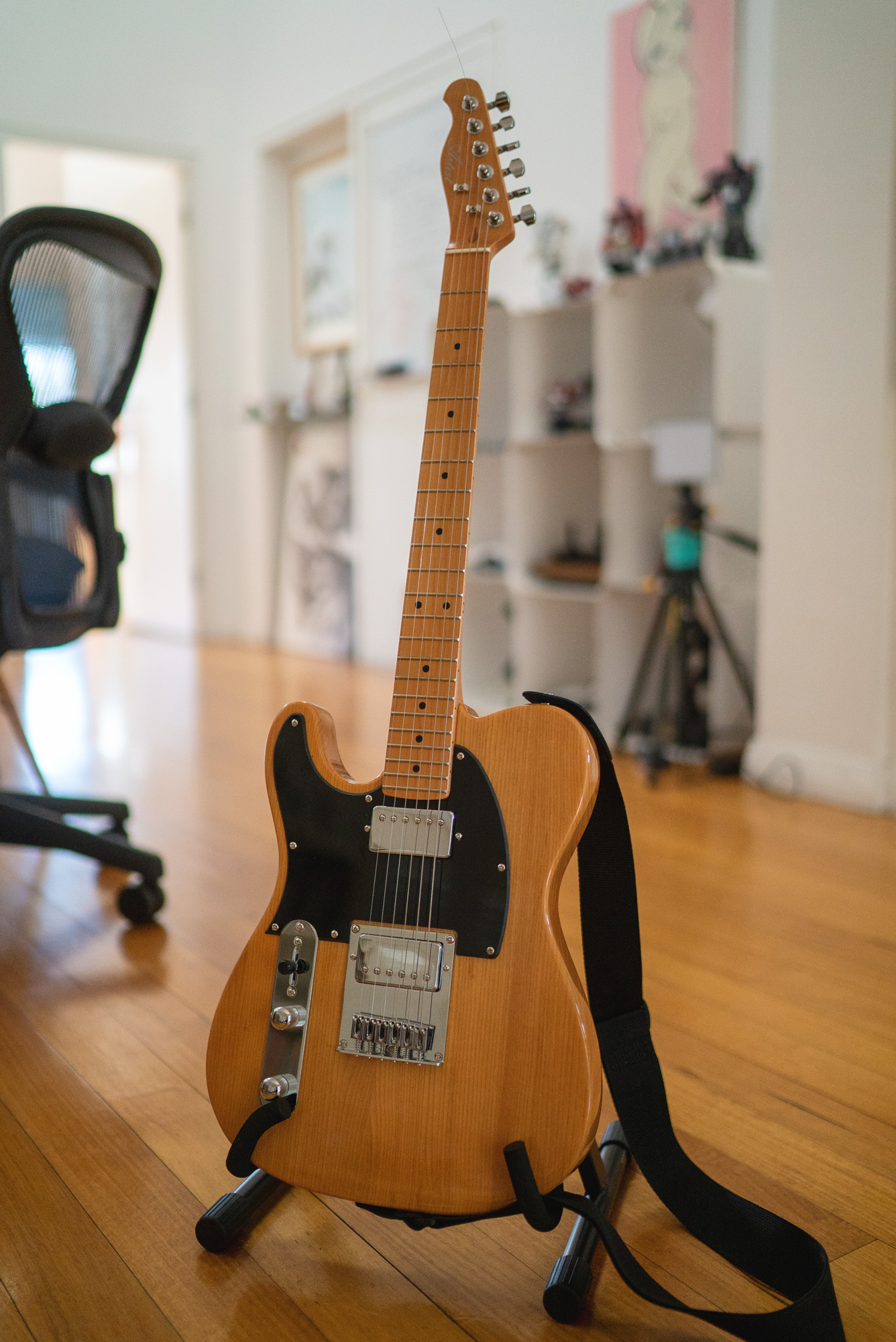 In high school I got into playing the guitar and in year 12 I made a custom left-handed Telecaster for my Industrial Tech major project. From a distance it looked OK, but both played and sounded like absolute crap. When I was in uni I was in a 3 piece rock band, we gigged around Sydney, won the Bowlow at Broadway band comp and got to the semi-finals of the Sydney Uni band comp, but I came to the realisation that I might never make it as a rock star, so I decided to call it quits. In 1997 I had well and truly hung up my metal shredders and bought myself a Korean made Pro Tone Fender Squier Stratocaster in vintage blonde, a colourway so offensively ugly to me at the time which was exactly why I had to have it.

I’ve bought a fair few more guitars since the late 90’s but I’ve not played any guitar more than the Strat (so I suppose that makes me a strat guy!). For many years now my master plan has been to buy myself an American made lefty Strat, but alas I have a problem with impulse buying $500 lefty guitars on eBay (got to try them all!). There’s absolutely no doubt that if I hadn’t bought all these cheap guitars over the years I would have been able to afford my dream guitar by now, but hey, it is what it is!

So fast forward to now; I have newfound motivation and I’m determined to become a better guitar player. I’m realising that I’ve spent years playing the same things, over and over, solidifying bad habits and generally jamming lots, but not practising at all. I have lots to undo, but I’ve been on it, building up my calluses, learning scales, playing with alternative tunings and watching a whole lot of guitar content on YouTube, and that’s what led me to this guitar purchase.

I’ve been watching tutorial vids, and also jamming to blues backing tracks, but in my downtime (when my fingers hurt too much to play) I’ve been watching gear reviews. Initially I was watching reviews on top end gear, but that nasty algorithm started feeding me videos on how to upgrade my Squier, then it got me onto watching pro guitarists playing on cheap guitars, then onto YouTubers reviewing cheap sub $100US guitars.

I come from a marketing background so I have a sixth sense when it comes to advertising. It’s black and white to me when a content creator is being sponsored by a company, but I found a few good reviews on cheap guitars by “Artist Guitars“, an Australian company that makes their guitars in China. They make a Gibson Les Paul copy, a guitar I’ve always wanted to own as I’m a huge Slash fan, an SG, also a guitar I’ve always wanted to own, and then there it was, a Telecaster copy for $289 AUD ($279 if you’re not a lefty, ah gotta love that lefty tax!). I thought about it for a while, but you know, one of those late nights I must have hit the buy now button, and well, 2 days after the online purchase the guitar was at my doorstep.

First impressions: The guitar came in a cardboard box with what seemed like very little protection, inside the box the guitar was in a plastic bag tied up with an elastic band. I started to feel a little less confident in my purchase when I started ripping at the sticky tape that held the tissue paper over the strings. The thought of this guitar coming all the way from China in this flimsy cardboard box had me in all sorts of doubt.

The first thing I did was put my nail to the Artist logo on the headstock. To my surprise the letters started moving. Yes, the sticker is under the clear coat, but the clear coat is so thin that you can remove the sticker. Crazy! 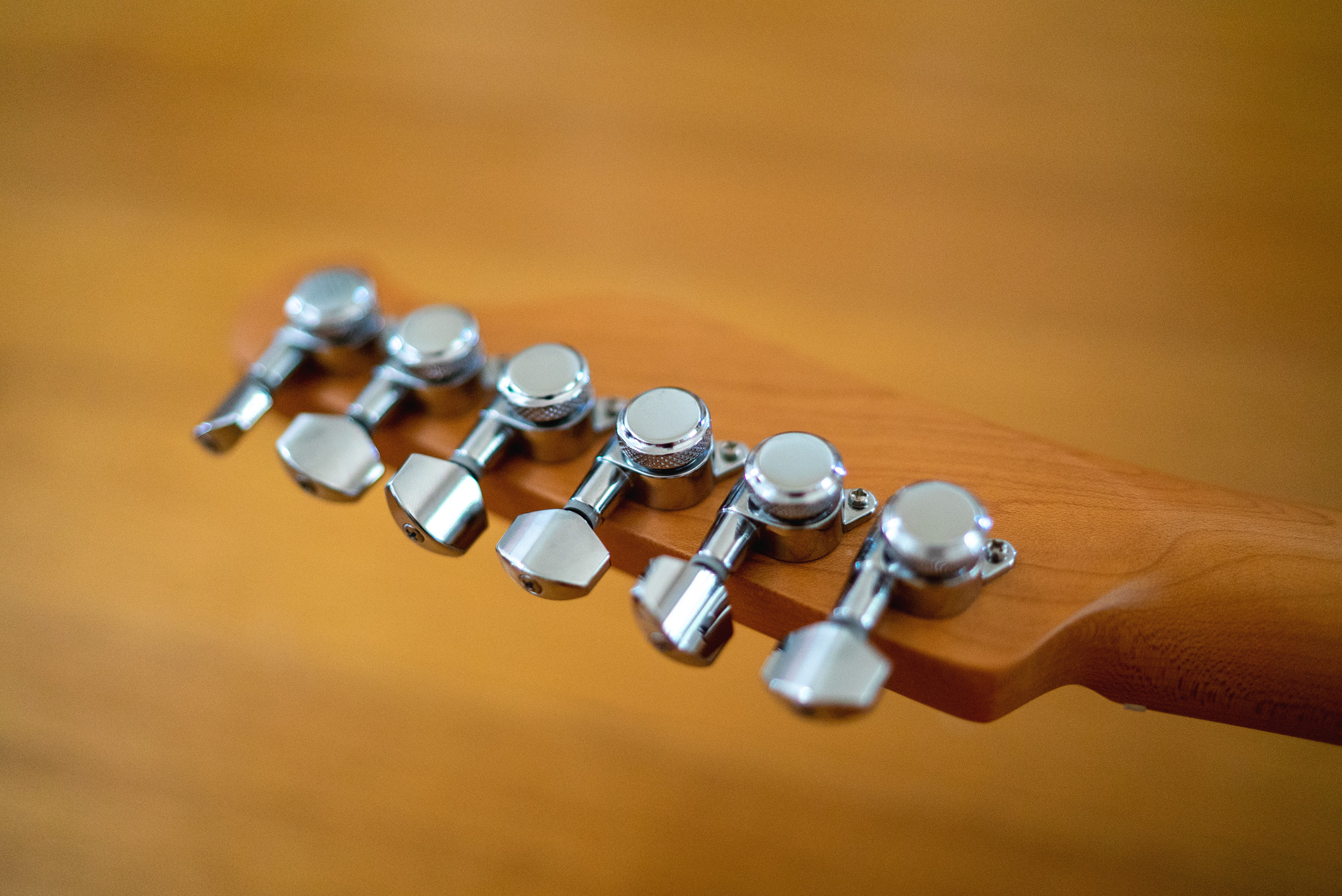 The guitar comes with locking nuts which are new to me (I’ve never had them on any of my guitars). The nuts were loose and the guitar was nowhere near in tune. On tuning it up one string gave way at the locking nut, annoying but a better sing than say a string snapping at the nut, or bridge. 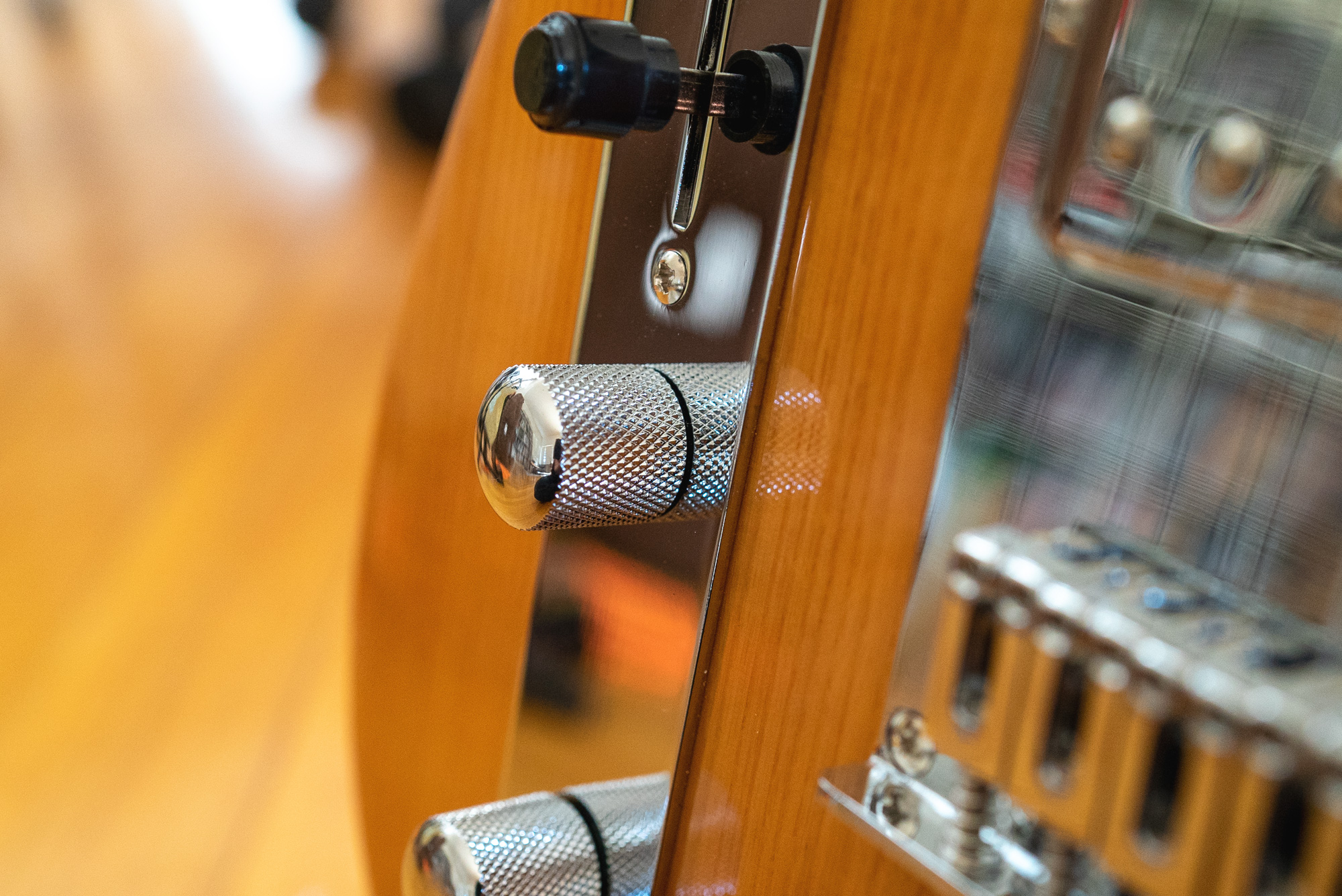 The next thing I noticed was that both knobs do not spin straight. IE: When you turn the volume or tone knobs, the gap between the bottom of the knob and the guitar body change as you turn them. Can’t say I’ve ever owned a guitar which has this issue. It’s a pretty massive turn off for sure. 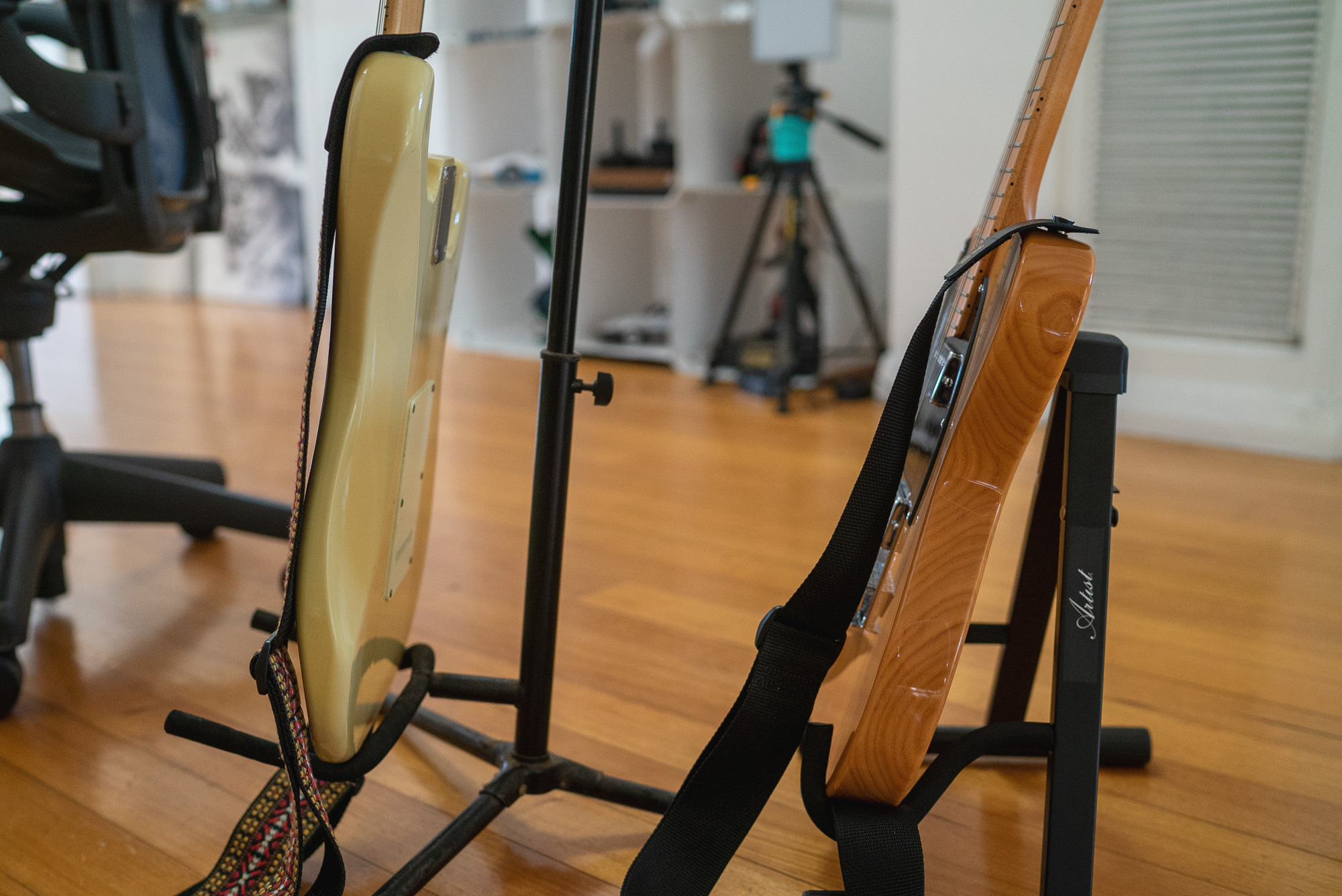 This guitar is hands down the heaviest guitar I’ve ever owned and also super uncomfortable, not Artist’s fault though as traditional Telecasters are essentially slabs of wood whereas the Strat has a huge ergonomic cutout for your hip.

You get what you pay for?

Acoustically the guitar is louder and has more sustain than all the rest of the electric guitars in my collection. The guitar holds tune ridiculously well too, in fact it holds tune beter than any guitar I’ve ever owned. The action is quite nice (lower than my Strat) but the neck feels thicker than the neck on my Strat (a Pro Tone made in Korea model which apparently has one of the thinnest necks of all Fender Squire Strats), or any other electric guitar I currently own. When I switch between the Strat and the TC59 and play the same tunes I just feel so much faster on the Strat and ultimately more comfortable and more at home.

But it’s not all bad! I’ve got my Strat permanently tuned down to E Flat and I’m loving the change (makes bending way easier). I run 9 gauge strings on all my electric guitars but I’m pretty sure the Artist comes with 10 gage strings. I’m going to leave them on and use the guitar as my training rig. Learning how to play clean and fast on the TC59 will help me play faster on my Strat. Bending heavier strings on the TC59 will make bending on my Strat a breeze and since the guitar is so damn heavy I’ll leave it permanently strapless in my bedroom for tutorial videos on the laptop.

Who knows, maybe I’ll like the guitar the more I play it, but even if I don’t I’ve at least confirmed a few things; that I value quality and craftsmanship (it’s the little things). I’m still a sucker for brand names (I see Fenders and Gibsons in my hopefully not too distant future guitar collection!) and that I most likely will never buy a guitar without playing it first ever again.